Chief Executive Officer (CEO) of defunct Menzgold gold-dealership firm, Nana Appiah Mensah, popularly known as NAM1, has lauded one of the two Ghanaian rappers in a tough lyrical feud over the past few days.
In a tweet, the businessman proved he had been ardently following the ‘war’ ongoing between his signed artiste Obibini and his colleague Amerado.
According to NAM1, Obibini had gone a long way to prove that his rap prowess overshadows that of Amerado.
But social media users claim this comes as no surprise because NAM1 is also the CEO of Zylofon Music and since Obibini is rooted in his music label, he has to guard him.
He wrote:
Heard my son is busy pitpatting, punning & peeing on a peasant’s poodle carcass in a puddle. Hold it @Obibiniboafo#wudinis.
M7 are u ready for a big concert? Get the #YardieRemix loud & on replay. Bless up @Amerado_Burner#wudinis#RapCulture#GhMusicBiz#zylofonMusic#godking, he tweeted.
Check out the tweet below: 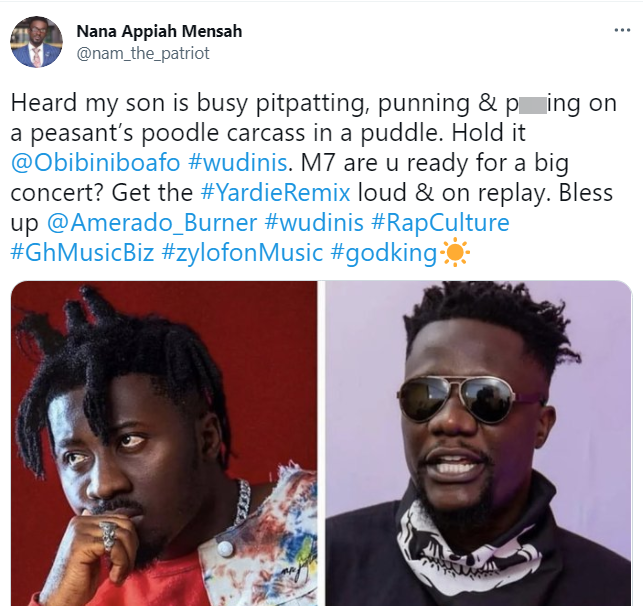 Don’t compare me to Moesha – Hajia4real to a blogger